The First State has a well-deserved reputation for the sophistication of its legal practice, and the firms that make up Law360's Delaware Powerhouses in 2017 have stood out amid fierce competition for their expertise advising clients in complicated intellectual property disputes, shareholder litigation and a boom in bankruptcy filings. 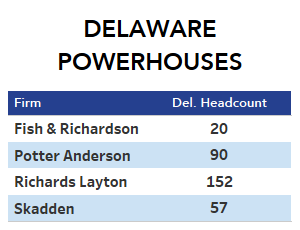 As part of its Regional Powerhouse series, Law360 is recognizing four firms that have stood out among a chorus of talent in Delaware and operated on the cutting edge of corporate and related law in the de facto home of the practice: Fish & Richardson PC, Potter Anderson & Corroon LLP, Richards Layton & Finger PA and Skadden Arps Slate Meagher & Flom LLP.

Delaware has traditionally been a magnet for complex corporate litigation, including bankruptcy and intellectual property cases, in part because so many corporations — more than 1 million — are organized within its borders and the state has generated a roster of judges recognized for their expertise and skill in the practice areas, said consultant Peter Zeughauser, chair of Zeughauser Group.

"If you have a strong case on the law, or you're trying to move the law in a direction, you're likely going to get a sophisticated judge you won't have to educate," Zeughauser said. "A judge in Delaware is more likely not to persuaded by irrational arguments, discern what makes sense and what doesn't, and think through the implications of a decision."

In order to rise to the occasion, law firms in Delaware need a stable of attorneys with intellect and litigation prowess to match. The body of law at all levels in Delaware is both dynamic and detailed, and in order to succeed in the First State, firms must be deeply rooted and connected to the legal ecosystem to untangle its intricacies.

"One of the unique characteristics of Delaware is the relationship the bench, bar and business community have with each other," said Doneene Damon, executive vice president of Richards Layton. "Delaware is a small legal community, and the way we work with the bench, we know the issues and can advise our clients how to address them."

Many attorneys at the firms recognized by Law360 regularly serve as members of the Delaware State Bar Association's governing council and the respective Chancery and Supreme courts' litigation rules committees.

"I wouldn't want to be a litigator anywhere else," said Robert S. Saunders, head of Skadden's Wilmington office. "It's not just the collegiality and professionalism. The intellect of the counsel we go up against every day is unmatched."

A number of the firms have had their alumni go to the Delaware benches. U.S. Bankruptcy Judge Laurie Selber Silverstein was a former Potter Anderson partner, and the firm has attracted former judges to its ranks, such as former Delaware Chief Justice Myron T. Steele.

The firms have also been in the First State for decades, before Delaware solidified its position as a corporate litigation hub. Fish set up shop in Delaware in 1990, well before the state became a go-to for patent litigation. Skadden has been in Delaware for roughly 40 years, and Potter Anderson and Richards Layton can both trace their lineage back to the 19th century.

If there's any area poised for growth in the Delaware legal market, it's IP, according to Michael B. Tumas, Potter Anderson's chair.

The federal court in Wilmington, where such cases are heard, is already brimming with IP cases, and the U.S. Supreme Court's recent TC Heartland v. Kraft ruling, which restricted the venue for patent lawsuits to where a company is incorporated or has an established place of business, is swelling the docket and turning up the temperature on an already hot litigation market.

"We've been involved in hundreds, if not thousands, of IP cases over the years, and the level of expertise and service is extremely competitive," Tumas said.

Potter Anderson has helped secure large jury verdicts, such as $3.3 million to E. I. du Pont de Nemours and Co. after Unifrax LLC was found liable for infringing a patent for thermal blanket coating used in aircraft structures.

The firm was also part of the team that successfully defended Intel Corp. against patent infringement claims from AVM Technologies Inc., where $2 billion in damages were at stake.

Fish & Richardson is also a standout in IP litigation, opening its doors in Wilmington in 1990, long before Delaware became a major hub for patent litigation, leveraging that experience in major trial wins for its clients.

"Here, because of the heavy docket for IP, you're dealing with a judge who, no matter the issue, the judge has seen it in the past," said Douglas E. McCann, principal in Fish's Wilmington office. "The judge knows when wool is being pulled, so the other side doesn't do it."

The firm won several major IP jury verdicts over the past year, including a $235 million win for GlaxoSmithKline LLC in its patent case against Teva Pharmaceuticals USA Inc., and a $56.9 million win for SRI International Inc. in its case against Cisco Systems Inc., which included an $8 million attorneys' fees award from a court that rarely awards fees.

"It's a more straightforward practice of law in Delaware," McCann said. "That's more enjoyable. There are fewer games."

Since at least the 1990s, Delaware has been one of the country's major bankruptcy venues, and its standing in that area has only grown.

Delaware has what can appear to the untrained eye an outsized stamp on the bankruptcy world compared to a financial hub like New York City, but the court in the First State has a "level of prominence" that matches its reputation as a corporate law beacon, Damon said.

"One of the reasons we've been successful as a state is — I don't want to call it a well-oiled machine, but it works well," she said.

Firms in Delaware have to be immediately responsive to their clients' needs and offer flexibility, with a willingness to schedule emergent hearings in the fast-paced insolvency space, making the court an attractive option.

One of the only states to have a separate court of equity, Delaware has developed its Chancery Court into one of the most respected corporate legal venues, with a body of law whose influence stretches across the world.

One of the hallmarks of Delaware corporate law is that it changes and adapts with a pace that mirrors how the business universe develops, and attorneys in Delaware need to keep up to speed.

"We've made a commitment to being Delaware law experts," Saunders said. "You really have to do your homework to be significant players."

For example, a major shift has occurred in mergers and acquisitions law, prompted by several rulings that clamped down on what the defense bar would characterize as nuisance lawsuits aimed at nearly every big deal and, it was argued, did nothing but generate attorneys' fees.

"As the law changes, it's up to us to help clients to change with it," Tumas said.

With that turn, firms are focusing now more on trial work, rather than the motion-to-dismiss stage that had previously ruled the day.

"We see lawyers on the plaintiffs side who'd rather take a case to trial and lose it, and that has an impact," Saunders said.

Appraisal litigation has also boomed, in part a reaction to some legal shifts, with cases becoming more nuanced and more like fierce M&A battles instead of dry valuation tests they'd once had a reputation for.

For instance, Richard Layton represented PetSmart Inc. in its appraisal case that determined the deal price in its $8.7 billion buyout by private equity purchasers was indeed fair value, instead of the roughly 50 percent value bump that hedge funds were seeking.

That case, along with several others, planted a flag into a dynamic of the court favoring the market price of deal, but not going as far as codifying it as a presumptive rule, and the landscape is continuing to shift, attorneys said.

"You've got to know the nuances," Damon said. "We make sure we've done deep dives, have a grasp and deep knowledge of Delaware law, and an ability to work with our clients and apply it to our clients' needs."

This article was originally published in the September 28, 2017 issue of Law360.